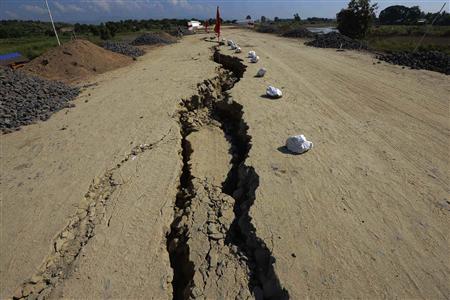 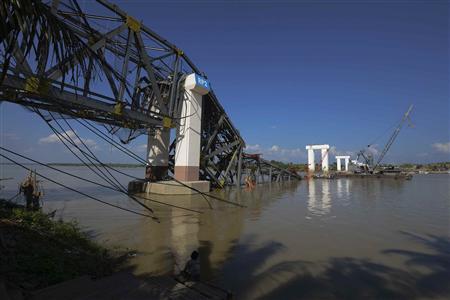 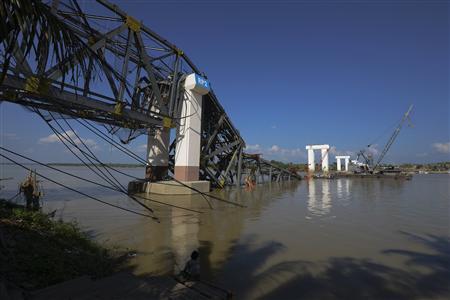 1 of 6. A damaged road is marked with flags after an earthquake struck an area near Kyauk Myaung November 11, 2012. An earthquake struck central Myanmar on Sunday near its second-biggest city, Mandalay, killing at least six people, with the death toll likely to rise as part of an unfinished bridge fell into the Irrawaddy River and several workers were missing.
Credit: Reuters/Stringer


(Reuters) - An earthquake struck central Myanmar on Sunday near its second-biggest city, Mandalay, killing at least six people, with the death toll likely to rise as part of an unfinished bridge fell into the Irrawaddy River and several workers were missing.


The earthquake, put at magnitude 6.8 by the local meteorological service, struck around 60 km (37 miles) northwest of Mandalay near the town of Shwebo at 7:41 a.m. (0111 GMT), and was quite shallow at around 10 km (6 miles) deep.
FREE GUIDES AND REPORTS FROM DIANOMI
ADVERTISEMENT

SIPPs Guide
Could you improve your pension with a SIPP?
Request Free Guide
A police officer in Shwebo said two people had died and 20 had been injured in nearby Kyauk Myaung.
"A house collapsed in Kyauk Myaung. The Radana Thinga Bridge, still under construction, over the river was badly damaged. A huge steel beam fell into the river and five workers went missing," he told Reuters.
State television, the usual mouthpiece for government statements in Myanmar along with state-run newspapers, said 15 people from the bridge construction site were missing.
It gave no death toll but said a number of religious buildings and pagodas had been destroyed or damaged. 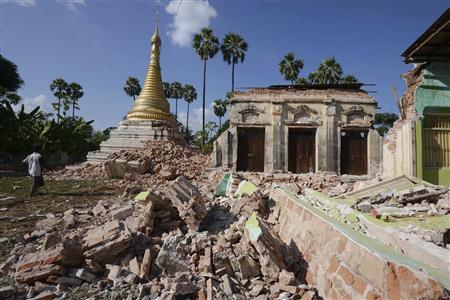 Media in Myanmar reported minor damage in several places around Mandalay, including Amarapura, a town popular with tourists because of its monasteries and the longest teak bridge in the world. Pagodas had been damaged there, media said.
One local source who declined to be named said at least 10 people were trapped in a gold mine in the Singgu area, where there are many small-scale mines.
A police officer in Singgu Township opposite Kyauk Myaung on the east side of the Irrawaddy told Reuters that four people had died there and another nine were injured in the earthquake.
"Those injured are not in a critical condition. We are still monitoring the damage and casualties in the environs," he said.
Several strong aftershocks hit the region, including one put at magnitude 5.8 as evening approached at 5:24 p.m. (1054 GMT).
The United Nations' Office for the Coordination of Humanitarian Affairs in Myanmar said the first quake was also felt in Thailand, Laos and Yunnan province in China.
"Information available at this stage indicates that the event did not result in serious damage," it said in a statement.
Myanmar is among Asia's poorest countries.

A quasi-civilian government has opened up the country since taking over in March 2011 from the military, which had ruled for nearly 50 years.
The military regime was condemned by humanitarian agencies in 2008 for initially refusing international help to cope with Cyclone Nargis, which killed more than 130,000 people.
President Barack Obama is set to become the first U.S. leader to visit Myanmar this month, the strongest international endorsement of the country's fragile democratic transition.
Obama will travel to Myanmar during a November 17-20 tour of Southeast Asia that will also take inThailand and Cambodia. It will be his first international trip since winning a second term last week.
(Additional reporting by Thin Lei Win in Bangkok; Writing by Alan Raybould; Editing by Ron Popeski)