People in two Chinese counties aren’t taking chances on the possibility of an impending apocalypse.
Local residents in Shuangliu and Longchang, two counties located in southwest China’s Sichuan province, have almost cleared shops there of candles and matches after speculation spread online that there would be three straight days of darkness starting Dec. 21, according to state-run Xinhua news agency. Vendors in both places are also selling supply packages and self-help manuals, according to the report. 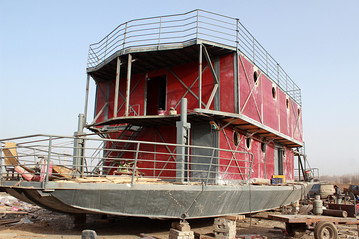 Agence France-Presse/Getty Images
This photo taken on November 24, 2012 shows the unfinished boat built by Lu Zhenhai, a man from Urumqi, Xinjiang Uyghur Autonomous Region, afraid that his home would be submerged in a doomsday flood in 2012. Lu said he decided to invest all his money, about $160,500 into building what he hopes will be his own indestructible ark.

The panic buying was triggered by myths, based on the ancient Mayan calendar, that the end of the world will come this December. While many scientists around the world, including at NASA, have debunked the theory, China seems to have plenty of believers.
A businessman from the east Chinese province of Jiangsu has even built a series of Noah’s Ark-like apocalypse survival capsules, Xinhua reported. Yang Zongfu is selling large stainless-steel ball shelters for between 1 million and 5 million yuan. He claims one Chinese customer has already bought fifteen and that orders have come in from New Zealand. The sales couldn’t be verified.
Worries about the world coming to an end are driving the Chinese to other drastic measures, including getting married. Xinhua reported that marriage registry offices in Xi’an, Hefei, Guangzhou and Shanghai have already maxed out their quota for approving marriages on Dec. 21.
Some attribute the Chinese preoccupation with the 2012 doomsday myth to the 2009 Hollywood blockbuster “2012,” in which an ark built by China saves the elite of humanity from global disaster. Earlier this year, merchants were selling boarding passes for Zhuo Ming Gu Ark on e-commerce site Taobao.com, in an effort to cash in on fears that the film’s plotline could end up being prophetic.
In a similar move, a handful of businesses recently took to Sina Corp.’s Weibo microblogging site to make special offers tied to the doomsday din.  Among them was popular candy brand Alpen Liebe, which offered 100 Weibo users a limited editionDec. 21 postcard sent from the doomsday ark as it sails through Tibet , if they tweeted back or re-tweeted the offer.
Surprising as it may be, the apocalypse panic in Sichuan pales in comparison to asalt-buying panic in 2011, triggered by more reasonable (though ultimately unfounded) fears over nuclear radiation spilling from Japan’s quake-damaged reactors.  Chinese authorities arrested a 31-year old Internet user for “spreading salt rumors” via an online posting that urged people to stock up because radiation from Japan had polluted the sea off of China’s coast. Some Chinese citizens even demand refunds for their salt after finding themselves with more than they could use.
There’s no word on whether residents in Shuangliu and Longchang plan to return their candles after Dec. 21. And, no arrests for spreading rumors have been made this time around.
Weibo showed plenty of netizens taking a calmer approach to the possibility of the world’s end, with many taking the opportunity to express gratitude and appreciation for their closest family. “If the world ends, I want to me with my mum and dad, because they are the most important people in the world to me,” said one female tweeter.
– Chao Deng. Follow her on Twitter @chao_deng
Like China Real Time on Facebook and follow us Twitter for the latest updates
Posted by Guihon at 6:37 AM